We’re thrilled to be joined by an exciting line up of speakers for ‘Culture: The Missing Link – A Lens on Policy’, hosted by Julie’s Bicycle in partnership with the British Council as part of The Climate Connection, a global platform for dialogue, cooperation and action against climate change in the lead up to the United Nations climate conference, COP26.

The event will thread together international conversations held earlier this year in the UK, Turkey, Indonesia, Colombia, Nigeria, and Italy and discuss the results of new research mapping national arts policies to climate policies, which seeks to strengthen the creative climate movement and mobilise action rapidly. 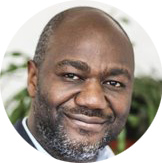 Professor Chukwumerije Okereke is the Director of the Centre for Climate Change and Development at Alex Ekwueme Federal University Ndufu-Alike and a Visiting Professor at the Universities of Reading and Oxford, UK respectively. He is a globally recognized leading scholar on global climate governance and international development with expertise in climate justice, national green growth transition in Africa, climate adaptation, business climate strategies, environmental policy, advising governments, corporates, and international institutions (e.g. United Nations, African Union). Professor Okereke was previously the Co-Director of the Center for Climate and Justice and the Leverhulme Doctoral Scholarship Programme at Reading University. He was also previously Director of the Center for Climate Change and Development at the Smith School of Enterprise and the Environment at the University of Oxford. Over the last 20 years, Professor Okereke has maintained an extensive high-impact engagement with national governments, businesses, and NGOs in Africa and led on several high-profile international projects on climate change policy, mainstreaming, and green economy transition in Africa. Professor Okereke is the Coordinating Lead Author of the UN’s Intergovernmental Panel on Climate Change (IPCC) Sixth Assessment Report.

Ms Moreno Mujica became Executive Director of IFACCA in August 2017, having first joined the organisation as Deputy Director in 2014. Prior to this she was Head of International Affairs at the National Council for Culture and the Arts, Chile (CNCA) and international advisor to three Ministers of Culture. In this role, she oversaw international arts and cultural strategy; served as Programme Director of the 6th World Summit on Arts and Culture (Santiago, 2014); delivered Chile’s participation in three Venice Biennales; served on the Board of Fundación Imagen de Chile; and represented CNCA on the IFACCA Board (2012-2014).

Before this Ms Moreno Mujica was based in Australia, where she was CEO of Kultour the national peak body supporting cultural diversity in the arts (2008-2011); a member of the National Cultural Policy Taskforce for Creative Australia; and led an international initiative to strengthen south-south dialogue (The South Project, 2004-2008). She holds a Bachelor of Arts from the University of Melbourne; is an alumna of the Asialink Leaders Program (2008) and the Australia Council for the Arts’ Emerging Leaders Program (2010); has served on several Boards, including for Diversity Arts Australia (2016-2018); and is currently a member of the UNESCO’s Expert Facility Group 2019-2022 to support the implementation of the 2005 Convention.

Dr Darren Henley OBE is chief executive of Arts Council England. Before joining the Arts Council, he led Classic FM for fifteen years first as managing editor and then as managing director. The author of two independent government reviews into music education and cultural education, his books include The Virtuous Circle: Why Creativity and Cultural Education Count (2014), The Arts Dividend: Why Investment in Culture Pays (2016), and Creativity: Why It Matters (2018). He holds a doctorate in professional studies, master’s degrees in management and in history of art, and a degree in politics. He is a Certified Coach and a Certified NLP Master Practitioner. Appointed an OBE for services to music, he received the British Academy President’s Medal for his contributions to music education, music research and the arts.

Rami Tawfiq is Director of Partnerships at the British Council, building strategic alliances with the private sector, government agencies and the philanthropic community. He is also the global partnerships lead for The Climate Connection – an initiative that builds climate cooperation through arts and culture, education and the English language, in support of COP 26.

Prior to joining the British Council in 2017, Rami spent eight years at Thomson Reuters, assuming leadership roles in business development and government relations across the Middle East and Asia-Pacific regions. He then served as Head of Enterprise Partnerships for the Global Emerging Markets division. Rami began his career in the UK as a news producer and strategy consultant.

Rami is a certified executive coach, diversity and inclusion sponsor at the British Council, and a member of the organisation’s Anti-Racism Taskforce. He received his MSc in International Management from SOAS University of London, and his LLB Law Degree from Queen Mary University and the University of Utrecht.

Juliana Olayinka is a broadcast journalist and communications consultant with over 15 years of industry experience.

She has contributed to output in the world’s leading newsrooms including Bloomberg, BBC, Thomson Reuters and ITN. Throughout the years Juliana has contributed to the launch of several English language news channels in London as an executive producer and as an on-air personality.

As a communications consultant Juliana works with African focused businesses to help them achieve greater exposure and a strategic change in narrative. This work extends to the public sector. Juliana was recruited to work in London for the successful 2019 Nigerian presidential campaign which resulted in the re-election of Muhammadu Buhari.

Juliana was also a communications advisor for Rory Stewart during his campaign to become Mayor of London in 2019. Past communications projects also include working with start-ups on stakeholder mapping and reputation management.

Juliana is the anchor and executive producer of a weekly business show, Channels Business Global. The show airs on Channels Television, a multi-award-winning 24-hour news organisation.

Since May 2016, Anne works as a seconded national expert with the Cultural Policy Unit of the Directorate General Education, Youth, Sport and Culture in Brussels promoting, inter alia, both the intangible and tangible cultural heritage of Europe. Anne, as Head Cultural Heritage Advisor, played a key role with the management of the European Year of Cultural Heritage 2018 with a reach of over 12 million people and is now actively working on its legacy. Anne has a special interest in sustainability – especially the impact of climate change on cultural heritage (European Green Deal) as well as sustainable cultural tourism. Before joining the Commission, she was a senior manager with the National Museum of Ireland and was responsible for a number of areas including ICT, governance, business planning and the development of a wide range of museum policies and guidelines. She was also a member of the Member States Expert Group on Digitisation and Digital Preservation and a member of both the UK and USA Overseas Tourism Marketing Initiative Working Groups. Anne introduced a number of initiatives in Ireland, notably the National Heritage Fund and Heritage Week. Anne has qualifications in a number of areas including history, marketing, education, strategic management and corporate governance.

Colombia. Traditional Singer, Composer, cultural and community leader, one of the most outstanding artists of the Colombian Pacific, founder of the musical group and training project ‘Canalón de Timbiquí’, leading voice of the groups Ondatropica, Pacifican Power, and co-founder of the musical project Quantic and Nidia Góngora.

Nominated for a Latin Grammy for best folk album in 2019, with her work she has managed to build bridges between the traditional music of her land and other genres of the world.

We will also hear an update from Julie’s Bicycle’s Climate Connection partners IKSV, 5 Cowries, Inspirit, & Fondo Acción – summarising the roundtable events which have taken place over the last few months, with Turkey, Indonesia, Nigeria and Colombia.

This website uses cookies to improve your experience while you navigate through the website. Out of these cookies, the cookies that are categorized as necessary are stored on your browser as they are essential for the working of basic functionalities of the website. We also use third-party cookies that help us analyze and understand how you use this website. These cookies will be stored in your browser only with your consent. You also have the option to opt-out of these cookies. But opting out of some of these cookies may have an effect on your browsing experience.
Necessary Always Enabled
Necessary cookies are absolutely essential for the website to function properly. This category only includes cookies that ensures basic functionalities and security features of the website. These cookies do not store any personal information.
Non-necessary
Any cookies that may not be particularly necessary for the website to function and is used specifically to collect user personal data via analytics, ads, other embedded contents are termed as non-necessary cookies. It is mandatory to procure user consent prior to running these cookies on your website.
SAVE & ACCEPT