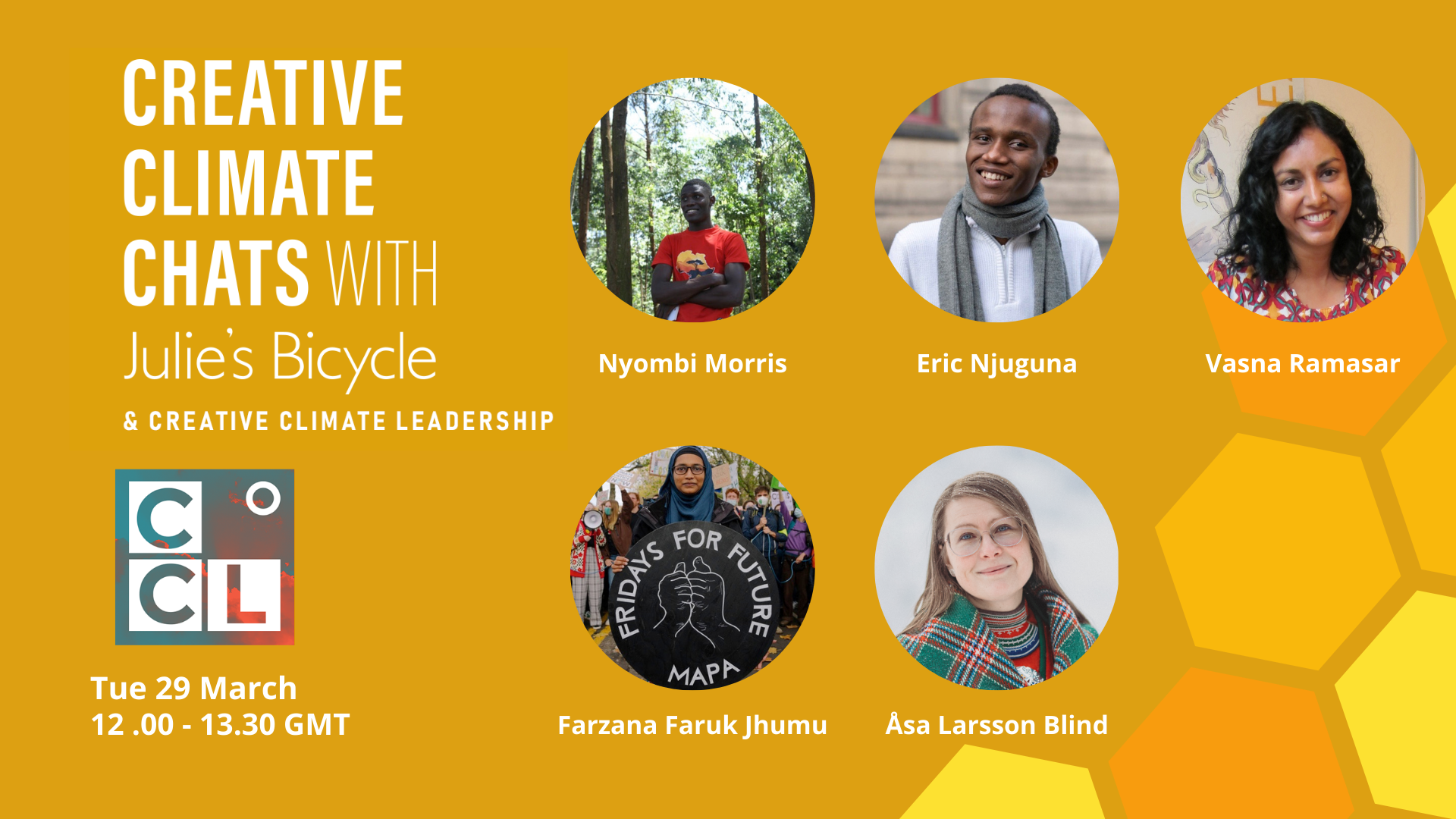 Julie’s Bicycle’s Creative Climate Chats are live conversations with leading thinkers in culture and climate on just transition, new economics for a regenerative economy, the net zero carbon challenge, and climate justice. Sign up below to participate, ask questions and be part of the conversation.

In this session we look at climate justice and cultural responses from Sámi and youth perspectives. We also look at what we can learn about leadership from research on systemic transformations in other sectors. Scroll down to learn more about the five fantastic speakers who we are welcoming on March 29th.

Åsa Larsson Blind is vice-president of the Saami Council. She has been a member of the Saami Council since 2008 and elected President in the period 2017-2019. She was, as first female, elected chair of the National Sámi Association in Sweden 2019-2021, where she also was a board member in 2007-2011. Larsson Blind has long experience from work in Sámi organizations, board member in the Sámi Educational Center in Jokkmokk 2007-2009, and 2002-2007 board member of the Sámi Youth organization in Sweden, Sáminuorra. Larsson Blind lives in Övre Soppero in the Swedish part of Sápmi, is part of a reindeer herding family and holds an MSc in Human Resources Management and Development.

Vasna Ramasar is a scholar-activist at the Division of Human Ecology, Lund University. Her research is framed within the broad field of critical political ecology and bringing an interdisciplinary perspective to questions of justice in development and sustainability. She focuses on feminist and decolonial approaches to environment and development and finding alternatives to the current destructive development paradigms. She is a founding member of the Collective Against Environmental Racism in Denmark; on the core group of the Global Tapestry of Alternatives and on the steering committee for Women Against Destructive Extractivism in Africa.

Eric Njuguna is a youth climate justice and human rights organizer from  Nairobi, Kenya. She is the campaigns lead at the Kenya Environmental Action Network, co-leads the national Fridays for Future group, and is the campaigns director at Kenya Environmental Action Network. She has worked with youth across Kenya, East Africa and Africa to build advocacy campaigns and build pressure on African leaders to take action on the climate crisis and mobilize the youth in Africa. In 2017, during her junior year in high school, Kenya was hit by severe droughts and having seen the impacts it had on children in her community she joined the youth climate movement to demand action from world leaders. She has worked with youth climate activists to organize climate strikes, education and capacity building events across the country. She also recently began working with UNICEF as a young leader on advocacy around NCDs.

Farzana Faruk Jhumu  is a 23 years old climate activist based in Dhaka, Bangladesh. She is also a co-founder of Kath-pencil, an organization for teaching the unprivileged children of her area. Farzana’s journey against the climate crisis started in 2017. But she joined Fridays for Future, Bangladesh, in 2019. Bangladesh being a severely affected country and Dhaka being one of the densely polluted cities she believes she has no other option but to start engaging with climate activism.

Nyombi Morris is a 23 years old Ugandan Climate Activist, a #SolvingIt Honoree, UNOCHA Ambassador, and CNN Environmentalist of Tomorrow who began his activism as a result of the direct impacts like flooding that disrupted his family’s source of livelihood and forced them to find a new place to call home.

– This event is organised in partnership with Creative Climate Leadership and Diego Galafasi and is the first in a series of three. See all three upcoming events on the CCL website here.