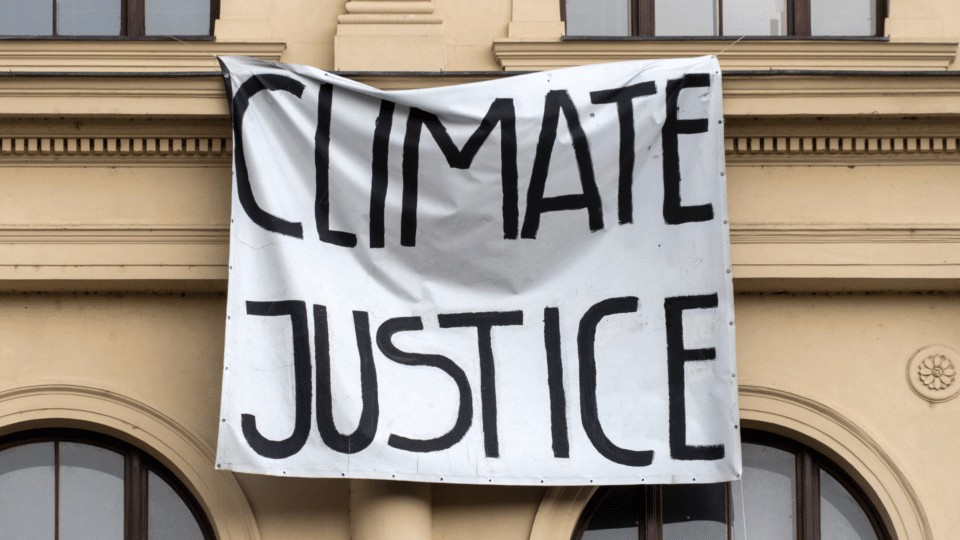 – This excerpt was taken from our Creative Climate Justice introductory webinar, written and presented by Charise Johnson, JB’s Policy Lead

Climate change refers to long-term shifts in temperatures and weather patterns, mainly caused by human activities, especially the burning of fossil fuels, which emit greenhouse gasses like methane, nitrous dioxide, and of course carbon dioxide, or CO2. And the more greenhouse gasses we emit, the hotter the planet gets, the more the weather patterns are disrupted or intensified, and the higher the risk for everything. So these climate feedback loops can look like hotter temperatures causing glaciers to melt for example.

When this happens, it means:

1: less solar energy is reflected back into space and more is absorbed by the earth, heating it up more.

This increases coastal erosion, putting coastal communities and ecosystems at risk because the warming air and ocean temperatures create more frequent and intense storms. All of these changes have knock-on effects for nearly everything happening on this planet.

Climate change is a wicked problem. Its tendrils permeate like a miasma through the fabric of society, compounding and creating more problems that can’t be covered with a blanket solution. And this is why climate change is known as a risk multiplier. As Margaret Atwood succinctly put it, “it’s not climate change, it’s everything change.”

Because the shifts and effects are unevenly distributed on local, national and global levels, it is not enough to focus on the environmental and physical science of climate change for solutions. We also need to examine the interconnectedness of economic, political and ethical issues surrounding the causes and impacts of climate change and act accordingly.

This is what climate justice does. It is both a framework to address inequities and reduce further climate change, and a movement that seeks to redress the systems of power that continue to marginalise, oppress and harm people and the planet.

The climate justice movement is multi-dimensional. It’s made up of several different movements, sectors and walks of life. All united under the umbrella of the great multiplier that is climate change, all recognising that impacts on nature are not separate from human impacts and vice versa.

There’s the labour movement who wants to ensure workers are paid fairly and given benefits, who demand that people on the frontlines and people working in the oil and gas industry are not left behind as we begin to move away from fossil fuels, to ensure farmworkers aren’t exploited by big corporations and overworked and left without livelihoods with increasing heat, droughts and floods.

There’s the global Indigenous movement which stands against issues that directly affect their lands, peoples and respective cultures, standing against violence towards their people and environment by those with power. Climate justice is racial justice. Last summer’s rallying cry following the murder of George Floyd in the US was “I can’t breathe”. It spoke to police brutality, but also of environmental injustice. In the US and at home in the UK communities with higher populations of people of colour are exposed to disproportionately high levels of air pollutants due to proximity of waste incinerators, high traffic areas, and redevelopment of contaminated lands known as brownfields.

Not only that, but it was Black and brown people who were disproportionately impacted by and likely to die from COVID-19. Even after adjusting for a laundry list of factors, and why? Because of race-based health inequalities that existed before COVID. Social Inequalities affecting health outcomes include living in polluted areas, overcrowded housing, job insecurity, and low-paid work and rampant institutional discrimination, all of which will and are worsening, with climate change.

Climate justice is land justice, interrogating who owns the land, and who has access to it. Two-thirds of land in England is owned by less than 1% of the population, even access to green spaces is unequal to what we saw during the lockdown as well. It was mostly people of colour who didn’t have access to parks, and the mental health benefits of outdoor green spaces. Climate change is a human rights issue, causing hunger, displacement, unemployment, illness, and death.

Climate justice is intergenerational justice, the idea that generations have responsibility for future generations. What will the planet be like for future generations? What is it like for children now, already impacted by climate change? We see the youth fighting injustice rallying to hold leaders and fossil fuel companies to account to reduce emissions. But what are their childhoods? Climate justice asks where and who is impacted the most, as well as how, why, and importantly what is being done to account for it all in a way that doesn’t cause more harm.

Climate justice interrogates the root cause of the injustices and inequalities born from climate change, which lie heavily in the extractive nature of colonial capitalism. A case in point – five of the biggest banks in the UK funded over 40 billion pounds into coal alone, between 2018 and 2020. But it goes back even further. Modern European empires expanded, using violence and control to colonise and settle into lands inhabited by Native peoples, erasing their cultures and exploiting resources like fossil fuels, minerals, food, wildlife, water, and even people for profit.

This abuse of resources continues today, particularly in former colonies in the Global South, to feed our consumption in the Global North. Like in Malaysia, where the UK, US, Germany and Italy send their plastic waste. This abuse also comes in the form of harmful, ecofascist ideals, like Prince William’s recent comments attributing ‘African population increase to the decline of Africa’s wildlife and wild spaces’, saying this is challenging for conservationists.

Yet the wealthiest 10% of the world produced half of all emissions between 1990 and 2015, and western conservation strategies have destroyed the livelihoods of millions of Indigenous peoples. Not only is there an economic North/South divide, there are divisions within countries in the Global North that lead to similar exploitation injustice.

Take for instance the environmental injustice of what is known as ‘cancer alley’ in the state of Louisiana in the US, between Baton Rouge and New Orleans where mostly Black and brown communities that are laden with toxic chemicals from petrochemical plants. This area was originally dubbed plantation country, where enslaved people were forced into labour. Or take the tar sands in Alberta Canada where oil fields the size of England have contaminated the traditional lands and health of Indigenous communities that still live there.

What these scenarios have in common is development and extraction without consultation or concern for nature or local communities. They have in common racism, health inequality, a lack of or degradation of green spaces and little to no political power. Despite it all, there’s a great deal of dedicated community activism to fight for their lives.

At the global level though, climate change solutions have typically been based on emissions, who emits the most, who is emitted the most historically, and how they can reduce their emissions to that of 1990s levels. For example, the UN Conference of Parties, or COP. To reduce it down to a condensed definition: it’s the annual meeting where nations get together under pithy slogans like “keep 2.5 alive”. It’s where they negotiate who’s responsible for climate change and its devastating impacts, and what each of their respective countries promises to do so it won’t get worse.

We’re already at around 1.2 degrees Celsius above pre-industrial levels and seeing the wildfires, drought, heat, and storms kick off myriad species and entire ecosystems lost, people being displaced, the most vulnerable countries were told in 2009 that the wealthier high emitting countries would provide $100 billion in finance to them per year by 2020. But they didn’t. And the finance they did provide was mostly loans which are increasing the burden to the vulnerable nations. Climate change as we know it is a human-caused problem needing human-centered solutions. From the destructive economic and political systems and devastation of lands, water and air, to loss and abuse of all living things.

Climate justice demands not only equitable public policies and outcomes for the immediate future, but retribution for damage already done. It requires solutions to be built with and for the people and places most affected. It will require a just transition providing climate finance to the countries and communities who have suffered great losses and damages in the face of climate change with little recourse. It will require institutional divestment from fossil fuel companies by universities, pension funds, and charitable foundations. And it will require societal shifts to cultures where life in nature is valued, and not exploited for personal gain.

It will require all of us. Whether your focus is on creating art or curating collections, designing sustainable and accessible buildings or planning cities, organising in your community or teaching people how to grow their own food: Everyone has a role in rectifying the wrongs of climate injustice, to make the world a better place for those impacted now and in the years to come. To paraphrase the great philosopher Mufasa’s words to his young son: “Everything the light touches, it is yours to protect – so must we, for even the darkest reaches of the earth where the light does not permeate, is ours to protect.”