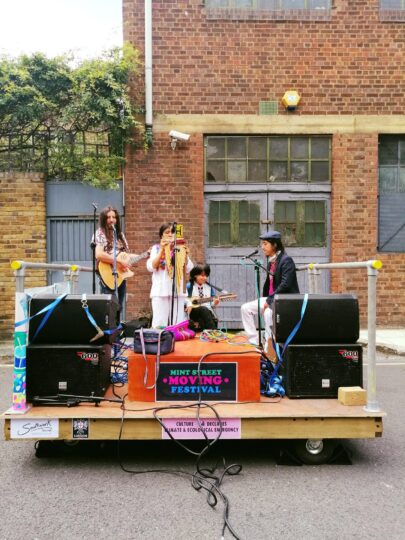 We’re heartened to hear from Mint Street Music Festival, who are sharing with us their experience putting on a live music event safely in July, helping to lift their local community’s spirits through music. The team put together Mint Street Moving Festival, a special live music event on a stage travelling through Southwark housing estates. To help them power their mobile stage, we put them in touch with Tim Benson from Smart Power, who chairs the Powerful Thinking energy group within Vision 2025, to fit the stage with batteries so that it could run without generators. Read on to find out how the team brought this unique event to life.

At a time of cancelled festivals, closed venues, and gigs happening only on screen, on the 11th of July 2020 the team behind SE1’s annual Mint Street Music Festival brought a unique event to housing blocks in Mint Street Park’s immediate vicinity: socially-distanced, free, outdoor, live music for the Southwark community – Mint Street Moving Festival. As one resident commented:

“It was wonderful. It felt like a safely distanced environment, and the spontaneity of the set made it really exciting, not least hearing live music the first time in months.”

The event was carefully planned to be completely socially distanced, endorsed and supported by the area’s main social housing providers Southwark Council and the City of London Corporation, and welcomed by tenants and residents associations in the blocks along the route. The band members of Lokandes were from a single household and their performances at each stop were for estate residents, who viewed the show from their front doors, balconies and windows.

Built by the community, powered by industry experts

The stages – originally made for the Festival two years ago as a project by the local Blackfriars Settlement Mental Health Woodwork Group – were newly fitted out by one of the leading mobile power suppliers in the industry, Smart Power Ltd., who in any other year would have been busy preparing for high profile festivals and sports events. The rechargeable batteries allowed the stage to power a PA and backline, delivering a sound quality and volume perfectly suited for the distanced audience.

With the newly powered mobile stages up and running the Mint Street Music Festival Team plan further live performances delivered direct to people’s doors over the coming months. Any groups interested in collaborating or hiring the stage can email mintstreetmusicfestival@gmail.com.

If you’ve been adapting your work in creative ways in order to reach audiences, we’d love to hear from you and share your story.