Young voices at We Make Tomorrow 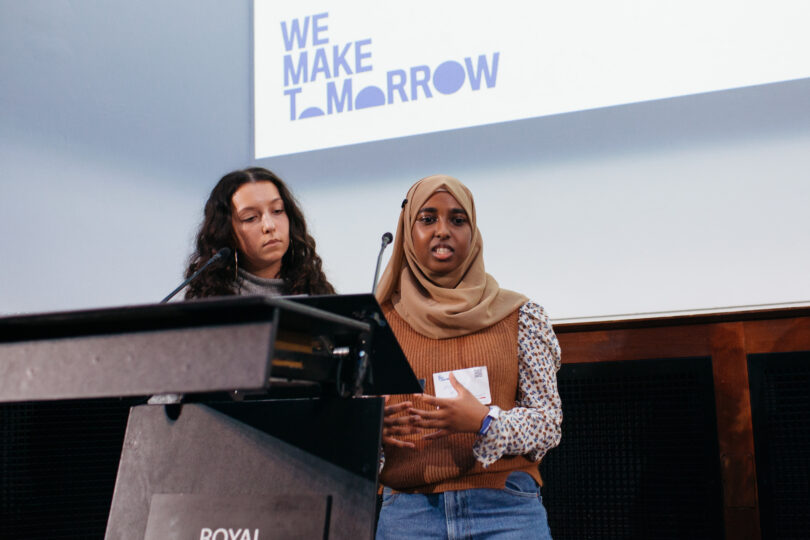 The #WeMakeTomorrow summit really shed a light on how the arts & Cculture sector is fighting against climate change. It definitely emphasised to me the importance of collaboration, partnership and friendship, especially in the creative sector. We are really lucky to be part of an industry which can reach such a diverse audience, which some other industries can’t.

I feel strongly about the importance of engaging with young people and holding more thought-provoking and accessible events specifically for the youth.

Throughout the day people from all walks of life spoke on practical and physical ways we can tackle the climate crisis. Having action-based events like this is hugely beneficial to institutions getting on board with their move towards a NET0 future, but also on a personal level how to reduce your carbon and plastic footprint.

In the last year we have seen a huge movement towards raising awareness, and at the forefront of this is the number of young people leading global strikes and marches; it’s essential to acknowledge and build on the excitement and momentum that young people are bringing to strike change and demanding this shift.

Zamzam Ibrahim (President of the National Union of Students) raised some necessary points about recognising the role we all play in the world regardless of our sector or industry and more on a human level. We have become almost desensitised to humanity and art can play an essential role in education and emotion which we can all connect with on some level. Arts and culture hold much responsibility on how we can change society, in the stories we tell through visual communication because of how relatable it can be.

The event echoed my thoughts on the need to connect people in communities who are not thinking about climate change because of life priorities and the need to go beyond your own bubble and how we can do this effectively through the arts and culture sector.

It was enriching learning about what needs to happen but crucially how it needs to happen to stop the irreversible loss of environments and species of animals that are being killed at a rapid pace. The floods here in the UK, the recent mudslides in Nigeria and the fires in Australia are a very physical and obvious sign of how fast our world is changing.

Moving on from this event I’d love to see more action-based and accessible summits that young people can be involved in. The event reiterated my thoughts on how we take our Earth for granted and the need to begin to love and cherish our planet more than ever before, it’s our global duty as humans to strike change.

I believe young people understand the importance of implementing education on the climate crisis in their day to day education and they are the ones beginning to mobilise a global movement. I think people should learn more from that fearless energy that young people have.

The We Make Tomorrow summit, hosted by Julie’s Bicycle focused on the intersections of art and the climate. While we often think of the creative arts as being opposed to the science behind our warming planet, the programme challenged this and showed that the road to the future involves the two disciplines working together to make meaningful change.

We were also privileged enough to see a handful of live performances. From the Nest Collective, the musician Abel Selacoe played moving pieces on the cello that called on Mother Nature. Similarly, the multi-instrumentalist Cosmo Sheldrake demonstrated how he makes modern music out of birdsong. The programme continually highlighted the link between economic institutions and the creative economy. When speaking at the Forging, Foraging and Regeneration talk, sculptor Jason deCaires Taylor showed his underwater sculptures which both promote tourism and help the regeneration ecologies harmed by human interference. It was clear that changing the narrative about the fatalistic nature of the climate crisis is key to enacting change in this important time.

I was personally inspired by the voices of the younger people at We Make Tomorrow such as Zamzam Ibrahim, president of the National Union for Students. She spoke eloquently about the realities of being a climate change activist and being a person of colour. She evoked that while climate change may be a looming threat for those of us in the UK, it is already plaguing people in the global south and in less economically developed countries.

Student activist Noga Levy-Rapoport, who was instrumental in organising the student protests, explained the grassroots nature of Student Climate Network. How it started with a dozen young people across the country on a group chat. Like other contemporary activist groups, the UK Student Climate Network is decentralised, with no leaders the group emphasise democracy and local organising over national leadership. She also emphasised that movements like the one against climate change are not sudden new arrivals, rather they are built on the backs of decades of community and grassroots support.

Known as “The Streets Elected Voice ”, grime artist Drill Minister spoke passionately about how climate change affects the people and particularly the youth in inner cities. He reminded us of the case of Ella Roberta, the nine-year-old girl who died in 2013 of air pollution. Yet so little has been done by the UK government. Now running to be Mayor of London, Drill Minister spoke about his plans to make London a more sustainable city.

Known as “The Streets Elected Voice ”, grime artist Drill Minister spoke passionately about how climate change affects the people and particularly the youth in inner cities. He reminded us of the case of Ella Roberta, the nine-year-old girl who died in 2013 of air pollution. Yet so little has been done by the UK government. Now running to be Mayor of London, Drill Minister spoke about his plans to make London a more sustainable city.

We Make Tomorrow reminded me that while it is true that humans and their affinity for fossil fuels have greatly harmed the environment, it is also true that only humans can change the course of history. Narratives all about the mistakes of humans rarely inspire change. Scientific achievements and global emissions targets can be met, in part by mobilising and using the arts to create alternative realities which prioritise optimism.

We Make Tomorrow was run in partnership with the Arts Council England as part of the environmental sustainability programme.