Artists of Change with Teatro Vivo 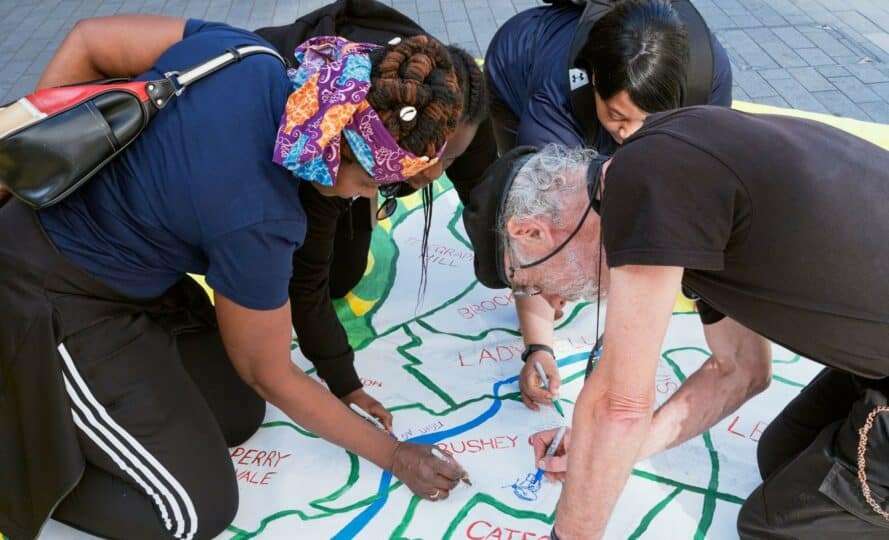 Teatro Vivo are an immersive, site-specific theatre company who create work in unusual spaces. They create shows without the need for sets; recycling clothing for costumes and transforming the spaces people already know into magical worlds through the power of performance and stories – bringing Shakespeare to supermarkets, exploring The Odyssey on the streets of Deptford, or exposing the truth behind the British arms  trade in public squares.

In 2022 Teatro Vivo were appointed ‘Artists of Change’ for Lewisham Borough of Culture, a 6 month residency with the climate resilience team at Lewisham Council, inspiring a piece of theatre at the end of the project. 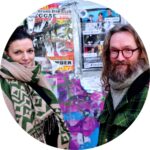 For the first three months we were embedded with the climate team – attending all their meetings as silent observers, being part of team meetings, and running their departmental strategy day. We’d always debrief with the team after each meeting so that we could have a full understanding of what was going on (and sometimes what was really going on underneath the conversations we’d witnessed).

Once we’d understood some of the issues and challenges around climate that the council team were attempting to tackle, we sent our Lewisham Usherettes out onto the streets to talk to local people. The Usherettes are street theatre characters that we’ve used since 2008 to engage people in conversations on the streets of Lewisham. We sent them to visit all 19 council wards in the borough – chatting to residents about the climate crisis – finding out what they thought we should be doing about it and what the barriers are to people actually doing those things. We also asked them what they’d love to see in a ‘Green Lewisham’ of the future.

We ran workshops with 19 different community groups (one from each council ward), exploring the same questions through drama and music. Every public session produced a report, so we ended up with masses of data around what people in Lewisham really thought about climate change and environmental issues.

Then we made a show!

We felt strongly that it was important to make a show that reflected and responded directly to what we had heard from local people. On the first day of rehearsals therefore, we had no idea what we would create, and started by reading all these reports, until key themes and threads emerged. The end result was a 20 minute devised show that genuinely reflected what people had told us. Interestingly, people generally were concerned about the climate, and wanted to see action and change, but felt frustrated that the focus seemed to be on the individual, and felt the futility of us all ‘doing our bit’ with recycling, for example, whilst watching governments and businesses fail to make changes that would really count. People were really angry – they were tired of being told what to do and made to feel guilty if their lives or health or income didn’t allow them to make ‘green’ choices, and wanted to see systematic change. That’s why the show became a demand to call those in power to account.

We were also asked to perform the show in the council chambers to members of the council. It felt like a brilliant moment of speaking truth to power. We felt that councillors genuinely engaged with the ideas in the show and are now discussing how they can better connect with their residents when planning climate measures. The show was also filmed and will be used as part of the induction process for everyone coming to work at the council from now on – hopefully spreading thinking about climate resilience throughout council departments (the show also contains descriptions of 2 alternative economic models: 15 min neighbourhoods and The Doughnut Model, and we think it’s really brilliant that all new council employees will have a basic understanding of these alternative ways of living!).

We were then asked by Borough of Culture to create a climate manifesto for Lewisham based on the desires and priorities we’d heard from people on the streets. This was presented at People’s Day (a large scale free festival in Lewisham), and is being used by Borough of Culture and numerous groups as a starting point to develop and spread ideas of what changes we should be asking our politicians and businesses to make.

A model for the future

Both the climate team and council at large felt that our direct access to the public gave them more and better qualitative data then they could have gained from any other form of research. It was felt that we reached communities they couldn’t. Our data, show and activism has given the climate team more clout with the rest of the council and enabled them to present their concerns to other departments more easily. It is a model that should be used at other councils to engage not only the public, but to galvanise action within their institutions.

Climate manifesto (created from what the people of Lewisham told us)