All over the world, arts and cultural organisations are rising to the challenge of climate change. Their creative power and voice is inspiring new thinking and ambitious action, adding to the growing public recognition that our rapidly degrading environment is the existential challenge of our time. Youth movements are demanding large-scale change across society and millions of people have taken to the streets to join the biggest climate protest in history, encouraging over 1000 local governments to declare a Climate Emergency.

Cultural leaders are responding to this call and transforming their institutions inside and out, with growing engagement leading to new international campaigns, including Culture Declares Emergency and Music Declares Emergency. Commitment to environmental issues is being reflected across all areas of cultural activity – from artistic programming to business planning, artistic productions to venue management.

One organisation at the forefront of environmental action is New Adventures.

New Adventures is proud to be a truly national dance-theatre company, touring across the UK as one of Britain’s leading exporters of dance. Over the past 30 years Matthew Bourne and his company New Adventures have changed the popularity of dance in Britain, creating works that have altered the public perception of what is possible when it comes to telling stories without words.

As of November 2019, New Adventures will add another string to its bow. In addition to its world-famous productions, it has now been certified as the first ever Creative Green touring organisation – scoring a fantastic 4 out of 5 stars for its Swan Lake UK tour. Working with Julie’s Bicycle to pioneer this latest certification scheme, New Adventures has set the blueprint for green touring practices.

This is based on an inherently green production model, with all shows remaining in the repertoire so the sets and props can be stored after each run and reused when the shows are next remounted, and costumes altered as required with each new cast.

This remarkable achievement is the outcome of an environmental journey New Adventures embarked upon in 2017 in partnership with Julie’s Bicycle – which started with a carbon footprint of Matthew Bourne’s adaptation of the classic Powell and Pressburger film: The Red Shoes. This initial audit, which included impacts from trucking to the paper used for its programmes, provided New Adventures with the insights it needed to take action on its environmental impact – and consider how to turn those red shoes green.

Steps for greening the touring model

From this point, new assets were developed – from an environmental policy and action plan, to green procurement guidelines and a green rider – even a new brand called ‘Green Adventures’ was created to engage staff and audiences with environmental stories and initiatives. As an Arts Council England NPO, the organisation continued to measure and report the carbon impacts of its office, however, like many cultural organisations, touring was still the biggest impact and main opportunity to test new practices. Keen to understand and act on this, New Adventures started developing ideas for “greening” their touring model.

Staff engagement was quickly recognised as critical to making change, and New Adventures set up its first Green Team as well as dedicated Green Champions within the touring company, including Dancer Andrew Ashton, and Lisa Champion, Head of Wigs. These committed individuals were the environmental eyes, ears and hands whilst on tour – for example conducting an audit of the backstage recycling facilities upon arriving to each tour venue. These audits engaged venues on the issue of waste (especially when additional recycling bins where requested!) leading some venues to make changes, demonstrating how influential visiting productions can be. These interventions were supported by New Adventures’ Green Rider which was sent to all tour venues, requesting information and actions covering key issues like energy, waste and catering. Alongside this, company and crew receive environmental briefings at first rehearsals and team meetings (supported by the environmental policy which is included in staff handbooks) and all dancers and crew are given branded reusable water bottles and hot drinks cups.

How New Adventures have been engaging audiences

Engaging audiences with Green Adventures was the next frontier. In addition to the dedicated webpage, there is also a Green Adventures social media schedule to communicate environmental actions as well as celebrating events such as Earth Hour and World Environment Day – there was even an Instagram Green takeover. New Adventures has been keen to understand and influence the behaviours of its audiences, for example by conducting an audience travel survey in collaboration with Norwich Theatre Royal. A specific social media campaign was run during the Swan Lake tour to raise awareness of single-use plastics, supported by the launch of new green merchandise (bottles, cups and tote bags) which is now available for fans to buy from the online shop. The ‘Go Green’ shop also donates 25p from every reusable bottle and cup sold to The Wildlife Trusts.

This action and commitment was further recognised at Julie’s Bicycle’s Creative Green Awards when New Adventures won the award for Creative Green Pioneer in 2018, and in 2019 for its Green Champion Andrew Ashton. 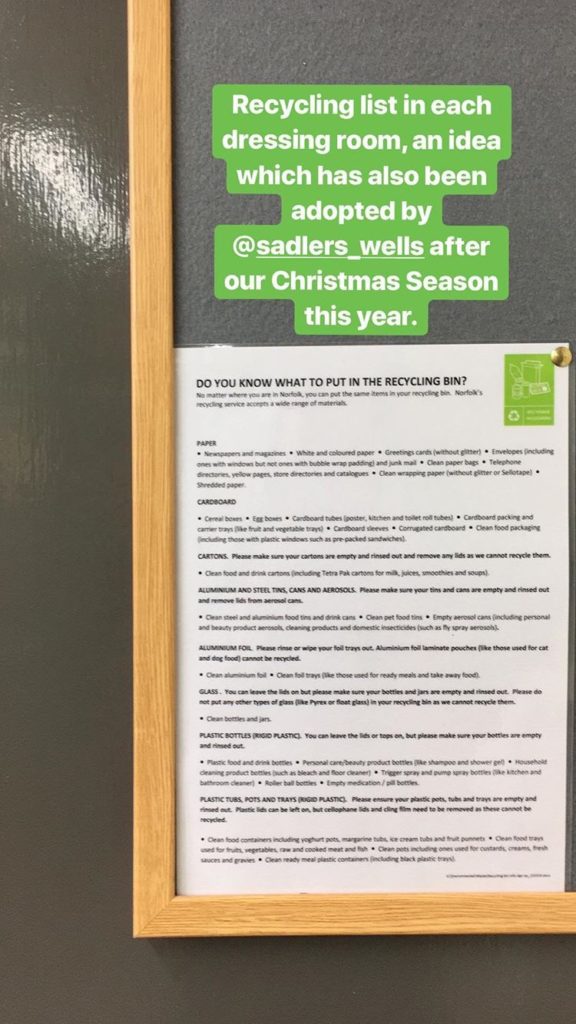 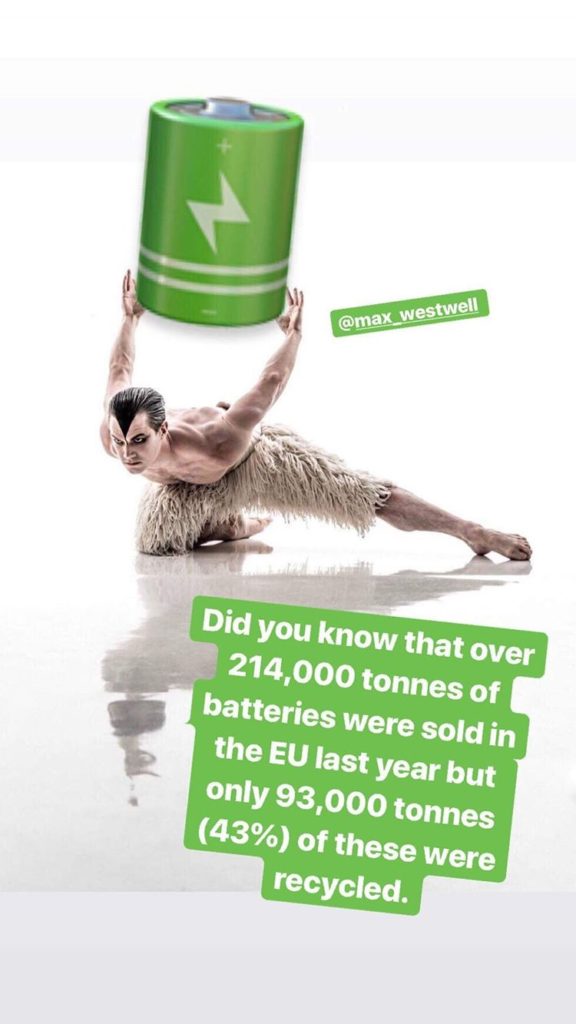 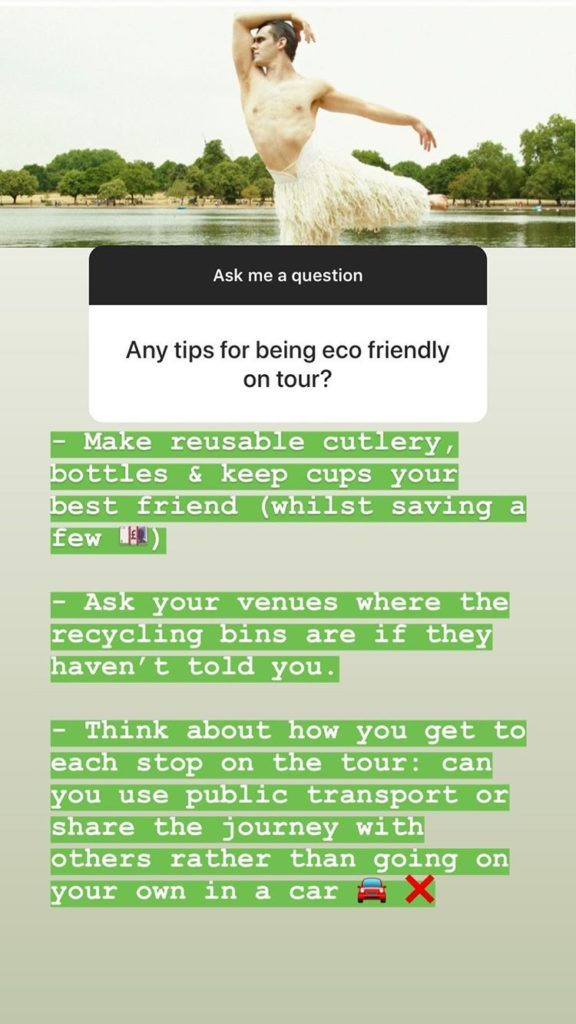 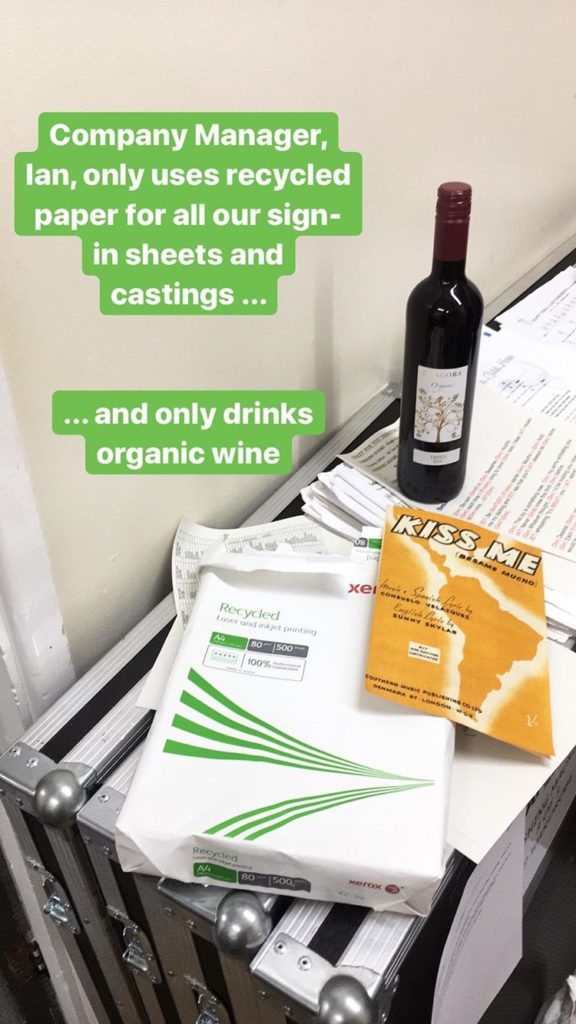 Considering the logistics of touring, New Adventures has reported the environmental data related to Swan Lake’s freight and personnel travel, as well as the show power which was measured during the tech week in Plymouth and at Sadler’s Wells. In addition, this carbon footprint included key materials used for the production such as timber and steel. During the tour, the team also got creative with production techniques, experimenting with ways to be more efficient and environmentally conscious – from switching PVC to cloth tape and makeup from pencil to paint; to reducing the swans’ use of shower gel (they need to shower twice during each show!).

Through Julie Bicycle’s Arts Council Accelerator programme and led by Head of Operations Louise Allen, New Adventures has developed a successful partnership with Sadler’s Wells and Norwich Theatre Royal to share practice and collaborate on green activities. Supported by this partnership, Norwich Theatre Royal offered a special discount on hot food to encourage the touring company to eat in-house. New Adventures Green Champions engaged with Sadler’s Wells over Islington Council’s recycling infrastructure with a list of materials subsequently displayed throughout the venue. This trio of environmental leaders has also been exchanging ideas with further organisations including the National Theatre, as well as the trailblazing touring company of singer Jack Johnson.

New Adventures continues to champion sustainability, taking steps to challenge standard behaviours and think innovatively about green initiatives. New Adventure’s inspiring and engaging audience communications are underpinned by the organisation’s commitment to understanding its impacts, trialling solutions and translating the learnings to other productions such as Cinderella and Romeo and Juliet. Crucially, this creative tour de force has pioneered a touring framework that will galvanise environmental ambition across the international community of moving arts.

All images sourced from New Adventures