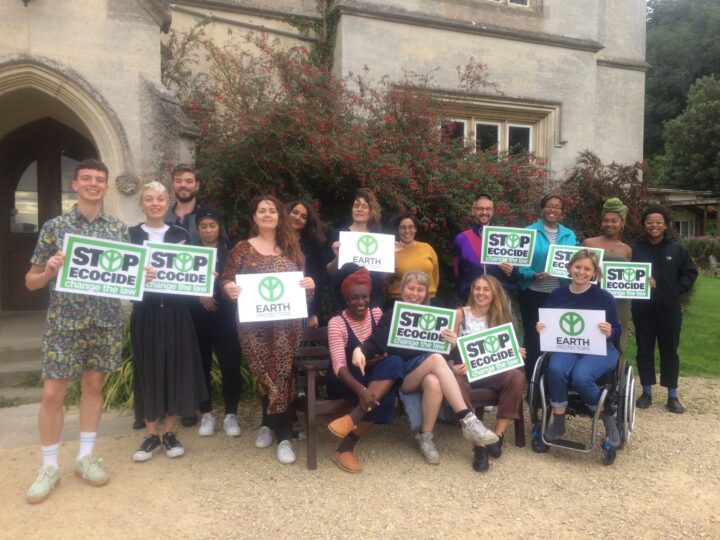 The London Theatre Consortium (LTC), a group of 14 producing theatres, has been running #LTCGreen, its environmental sustainability programme since 2010. Now in its ninth year, the group addresses global, systemic challenges to living and working sustainably using local, practical solutions.

“London Theatre Consortium has a proven commitment to energy and emission reduction going back nearly a decade. As acceptance of the climate emergency has become mainstream, rather than marginal, LTC theatres have been strongly positioned to ramp up their leadership and practice. The long, deep partnership with Julie’s Bicycle has enabled a really dynamic progression of our work together – our ambitious roadmap to 2025 and an explosion of creative projects across the theatres. I expect our work to be even more transformational and sector-leading in the years ahead.”

In 2018, LTC organised its first Artists Climate Lab, a week for theatre-makers selected by LTC member’s Artistic Directors exploring what it means to make art in the context of climate change, the challenges artists face and how they can respond. It was curated and led by three individuals from the Young Vic, Royal Court, Gate Theatre and the Donmar Warehouse, alumni of Julie’s Bicycle’s Creative Climate Leadership programme. The lab was part of the Season for Change 2018, a UK-wide programme of cultural responses celebrating the environment and inspiring urgent action on climate change. LTC has shared reflections on the first climate lab, which had its second incarnation in 2019. The Lab had funding from Arts Council England and was supported by Hawkwood College.

With support from Accelerator, a strand of Arts Council England’s Environmental Programme, LTC is developing a roadmap for achieving its 60% carbon reduction by 2025 in line with London targets (with over 40% already achieved), alongside continued development of the role that LTC theatres can play in tackling wider environmental issues. With support from Julie’s Bicycle, LTC continues to develop pathways to achieving its targets and is deepening collaboration with the Greater London Authority’s Culture and Environment teams. Four LTC theatres are also participating in Spotlight – another strand of Arts Council England’s Environmental Programme focused on building energy and carbon reduction – and the group is now looking at how to apply Spotlight learnings (target-setting and zero carbon pathways) across its theatres. In 2019, one of LTC’s members, the Royal Court Theatre, announced a commitment to going even further and faster and transitioning to a Carbon Net Zero Arts Venue throughout 2020. The operational changes will start with The Site – a performance space for experimental work – with the aim of making it net zero carbon by March 2020 to coincide with the start of Open Court: Climate Emergency. These changes will be then applied to the main building as it transitions to a net zero arts venue through 2020 and onwards.

LTC members have done a wide range of environmentally-themed programming and productions. Examples range from the Royal Court’s Climate Change: What Do You Want Me To Say – a short film made in partnership with the Financial Times featuring Nicola Walker; the Bush Theatre’s F**k the Polar Bears, and; the Unicorn’s Critical Conversations focused on young people and climate action. Many LTC theatres also run awareness-raising and engagement campaigns for their staff and audiences. Examples include the Lyric Hammersmith Theatre’s #FoodforThought, taking a closer look at the environmental impact of food, and #PlasticFreeLyric, Young Vic’s #MarchonPlastic and the Kiln Theatre’s electronics recycling campaign.

Each year, LTC theatres do the Creative Green certification, a process which helps them to track where they are on environmental understanding, commitment and improvement, identify sustainability successes and areas for improvement. In 2019, over a third of the LTC members achieved a five-star Creative Green certification – the highest rating, including the Lyric Hammersmith Theatre which achieved the highest ever individual Creative Green score to date. LTC won the ‘Commitment’ Award at the 2019 Creative Green Awards for a decade of work on sustainability showcasing joint climate leadership, best practice and creativity. More information can be found here.

Feeling Inspired? Find out about how your organisation could rise to the climate challenge through our Creative Green Certification Programme – which inspires and celebrates environmental best practice for events, venues, museums, galleries, festivals and offices across the creative sector- Deadline for applications for the 2020 cohort is the 21st February!