When Julie’s Bicycle was founded 11 years ago our challenge was very different: we had to make the case that climate had some bearing on the arts and culture, and that we had some capacity – maybe even responsibility – to do something about it. That argument is no longer relevant.

Our starting point in 2007 was to count your carbon – and it is still a vital part of what we do. But it didn’t take us long to widen the range of what we did and who we did it with – our music industry focus expanded into other arts and from footprinting we developed awards, consultancy, events, our Arts Council partnership, international advocacy, policy work etc. It’s been fun. But beyond the CO2e data we weren’t capturing the deep shifts, the changing view of climate and where it was in the cultural imagination that we saw in other parts of our work. We were in danger of misrepresenting the bigger picture. So in 2014 we asked people to tell us how they felt about the environment, how important it was to their missions, their business, their creative work, their teams and their audiences. That was our Sustaining Creativity Survey that we did with BOP. We repeated it last year, rebranding it the Creative Climate Census. We gathered almost 500 responses – over 100 more than 2014 – representing £1.1 billion UK cultural economy. It is the longest-running research anywhere – as far as I know the only research – which tracks over time the views and values alongside the actions of cultural decision-makers to climate change and environment. And the headlines are that there are more people involved, more activities, more leadership, and a deeper, wider broader connection right across the piece.

Specific highlights are that 3 years ago climate action was being pushed from the middle of organisations. It is now overwhelmingly driven by senior leadership though we have a way to go with boards. And it isn’t surprising: more than four in five organisations have benefited as compared to just over half in 2014. Benefits are substantial too and include better reputation, team morale and balance sheets. No wonder it’s coming from the top.

In 2014 the environment wasn’t generally understood as a catalyst for change and there was anxiety about the arts being shoehorned into climate campaigning. This just isn’t the case any longer. Environmental sustainability is a creative catalyst, inspiring new work and new ways of doing things.

And there is plenty more collaboration; three quarters of census organisations are collaborating on environmental activities both within and beyond the sector.

There is masses of rich content in the report. We have a section for funders and policy makers, a nudge to invest in this work, to link to international partners, and to include the creative industries in the UK’s low carbon growth strategy; and art form sections so you can see how theatre, or music are doing. You have also told us what you want us to do: you have asked us for a shared roadmap, more support for sharing experiences and good ideas, more professional development and signposting and brokerage to help you join the green economy. So that’s helpful, thank you. We’ll get on with that until we next meet!

But one thing hasn’t changed: The sector still doesn’t see the progress it is making. This is important – it might even be the single most important finding.

This year we launched Creative Climate Leadership, a programme of intensive training & support for people across the creative climate movement. We had applications from over 200 people from across the globe and what we inadvertently uncovered blew my mind: an extraordinary variety of inspired and expert creative practice – much more than I had imagined. But we also found that almost without exception people felt they were on their own. Just like the Census, they couldn’t see the wider context. We know that to often what isn’t seen is not felt as being real – the biggest challenge communicating climate change is the fact that it is caused by invisible gases.

As both our Census and Creative Climate Leadership work shows, people are not seeing this movement – even those making it.

JB can see it but for all our evidence, support to the sector, advocacy and research we are not yet succeeding in properly building this perception from within. Something has to be done that lodges the creative climate movement into our collective imagination. This feels to me so fundamental.

We need a common language, a place to be, and a community – in short, we need the grand narrative that tells the story. This is a critical evolution, because the shifting of consciousness and values is not just a long game, it is THE long game. It’s about grounding this work– for ourselves and then for others. Instead of pushing rocks up a hill, what would it look like to roll them from the top, to have gravity on our side?

So here is what JB sees: the Seven key trends that are changing the cultural sector. These might be a categories of our own invention, but they are inhabited by hundreds of real people and we believe that one of the most useful things we can do is to show this cluster of creative practice.

Building this movement doesn’t just do good for the climate but for culture too. Using the metrics that everyone understands – economic – we are seeing new jobs and job roles, goods and services, all these new relationships and partnerships, designs, systems and investments for the future. It all fits into the imperative of green growth. And we also have the potential to turn the cultural economy into an ecology that recognises value beyond the balance sheet, that’s organic, the very definition of true sustainability – nothing irrevocably lost, everything regenerative. This is happening in the wider economy – why not here? And because it is the whole creative community doing this it will Inevitably resonate in the hearts of everyone we touch – which is essentially everyone.

It is taken as a given that culture brings a wide range of benefits beyond GDP – community-building, social cohesion, well-being and health benefits. Yet this is not extended to arts and the environment. There is no logic that says the arts are only valued in some fields of social gain and not others. We have quite a bit of evidence to show how climate is catalysing culture. What we come back to, once again, is a movement concealed, not present when decisions and priorities are being formed. We have to turn this round. This ecology IS the economy of the future, and we need those who are in positions of decision-making to see it too.

Sustainability is a generous agenda: simply, everyone wins.

So here are our rocks, the Seven Creative Climate Trends that are already leveraging significant new value. 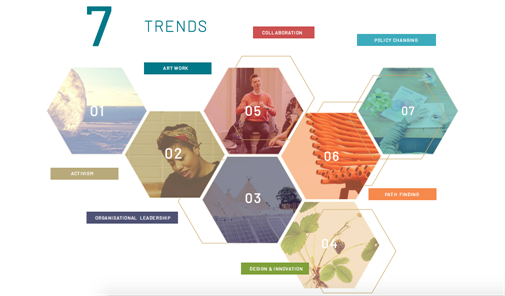 Artists and creatives publicly championing environmental causes. These people are uniquely placed to connect their audiences and fans, gather momentum, amplify calls for change, speak to power, and call on governments to raise ambition.

Creatives are rising to the challenges of sustainability with extraordinary ingenuity, innovating in material, social, cultural and economic ways that embrace environmental values and celebrate the exciting opportunities to remodel our world. Designers on the circular economy, artists doing new community-led work, and cultural innovators trialling new, values-led business models.

Creatives are coming together to be bigger than the sum of their parts, scaling action, accelerating learning, building communities of practice and demolishing outworn and unhelpful silos. This collaborative spirit, often reaching well beyond the sector, is generating new value based on a shared sense of purpose and possibility.

Individuals and organisations poised where culture and the environment meet, making the case, creating contexts for action, building bridges, setting the agenda, curating the conversations and demonstrating the possible.

Policy, a golden thread that binds together the values and narratives of the Seven Creative Climate Trends, creating the frameworks, investments, accountability, authority and pathways to drive progress and track change.

This idea, rooted in real practice, is a proposition and an invitation, it isn’t meant to be stuck, fixed or permanent or perfect. We have tracked hundreds of examples from all over the world which you can find on our website. This is an invitation to find, or put yourself on the map, or invite others to join it.

In Rebecca Solnit’s book Hope in the Dark she writes:

It’s always too soon to go home. Most of the great victories continue to unfold, unfinished in the sense that they are not yet fully realized, but also in the sense that they continue to spread influence. A phenomenon like the civil rights movement creates a vocabulary and a toolbox for social change used around the globe, so that its effects far outstrip its goals and specific achievements.

Click here to explore the findings of the Creative Climate Census

Click here to find out more about the Seven Cultural Climate Trends, put yourself on the creative climate map and spread the word about the Creative Climate Movement with with our hashtag #COPtimism.