Using VR in arts education with The Core at Corby Cube 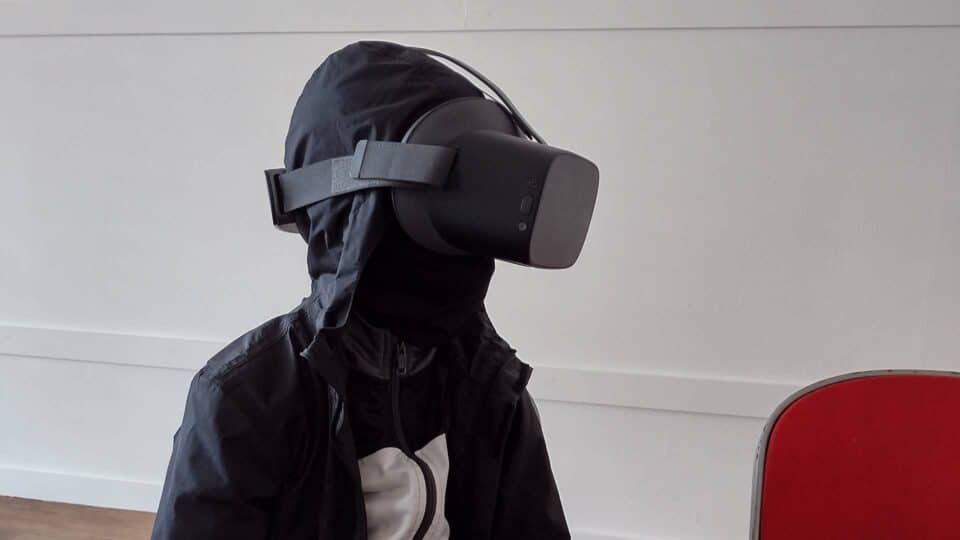 The Core at Corby Cube became interested in Virtual Reality and its potential as a new platform for telling stories and as a tool for arts education back in 2019.

Having consulted with a number of local secondary schools about the challenges and barriers to attendance at theatre shows at the venue, the problem of transport costs and indeed ticket prices for low income schools was recurring. In order to tackle this we saw VR as a potential way to decrease the cost to schools for transport as well as lowering the associated carbon emissions impact of live theatre production.

Artist Development is a key remit of our venue. Alongside the festival in October 2021, we set to work on a series of 5 x 10 minute VR plays. written and directed by Corby based new writers and directors. We did this at a time when access to the theatre was limited and uncertain due to COVID-19 pandemic. The artists were given a brief to create a 10 minute play, which had to be set outdoors and had to be staged for VR capture in 360 degrees.

In 2019, we completed a similar showcase programme for local writers and directors, whereby a 3 week rehearsal process culminated in a showcase event at The Core at Corby Cube Theatre. For the purpose of this case study, we have compared the CO2 created from the programme in 2019 to the programme in 21/22 and calculated the resulting emissions output per audience member reached.

Key differences between the programmes are:

Similarities between the programmes are:

We estimate that the CO2 emissions for 1 x audience member for the 2019 production was 7.968 KG (removing the variable factor of cast travel).

We estimate that the CO2 emissions for 1 x audience member for the 2022 VR plays is 0.081174 KG – this figure will decrease the more audience members view the work.

From our analysis, however, we have learned that the idea of doing a VR festival or a VR showcase evening whereby we invite audience members to the venue to see the plays is counterintuitive to the potential for VR theatre to lower emissions.

The five plays offer local audiences a thrilling and unexpected perspective and locally based stories from writers who live locally. The work can be viewed without the barrier of buying a ticket meaning that high quality relevant theatre can be experienced by our audiences as they go about their day to day lives.

We are finding that the VR platform predictably is exceptionally popular with younger age groups aged 9 to 25. In many cases younger audience members are already familiar with VR and many have a VR device, namely an oculus quest device, for gaming at home. We have found that children will be the first to engage when in pop up locations and will then encourage their parents to view.

In education settings, teachers have noted that students are incredibly attentive when in the VR experience, probably due to the immersive nature of the experience and are therefore more likely to engage with a conversation on the plays afterwards.

We estimate a significant lowering of CO2 emissions can be achieved by bringing the work to schools rather than schools attending the theatre.

Based on a class group of 30 students attending the venue from Northampton we calculate the C02 emissions as being – 362.038 KG.

Based on a class group of 30 students viewing at their school in Northampton with our facilitator travelling to the school we calculate the CO2 emissions as being 33.7888KG

However, there is a generational gap in the experiences of VR. At the showcase event, which would have attracted more traditional theatre goers predominantly in their mid 30’s to 60’s, we conducted a Q&A session about the VR plays. Whilst many were curious and intrigued by the work and the concept, a majority commented that whilst it was interesting and the stories were engaging, they felt isolated in the experience. Some commented that it was missing the element of collective experience and audience interaction, which was the essence of a theatre experience in their opinion.

We have worked very closely with METRO-BOULOT-DODO in Leicester. They offered much needed expertise and guidance around the technology and its applications and also provided the bulk of the artistic content that was presented at the first VR festival in 2021. They also advised on the type of VR headset to purchase and subsequently set the headsets up for us with custom graphics for The Core at Corby Cube.

We worked with LIVR technologies to create the 360 VR plays. LIVR are at the forefront of developing VR theatre and are working with a number of other organisations to maximise and evolve the potential of the platform.

The project engaged five writers and five directors all of whom were local to Corby. Nine artists were introduced to a brand new medium and were upskilled in the creation and development of virtual storytelling; both the technical process and the craft of writing and directing. As fed back by LIVR, their initial lack of experience of what was possible actually helped them to push the boundaries even further. LIVR highlighted the positioning of a highly expensive VR camera on the edge of a multi-storey car park as being one example.
All nine of the commissioned writers and directors are from Corby or nearby Kettering, with four of the five plays set in Corby and the fifth in Kettering. We have created pathways to further career development for underrepresented artists from these areas and from proud working-class backgrounds.

The project has grown our organisational capacity greatly to create and disseminate exciting and surprising theatre to new audiences and has also increased our ability to upskill artists in digital technologies. Working with LIVR, we are now interested in formalising a structured programme for digital artist development that would encapsulate all of the learning from this project.

We have learned extensively from undertaking this project across aspects including production, post production, technological challenges and dissemination and most importantly, from analysis of our carbon emissions, we can see that there is huge potential in VR going forward to help us and other venues to reach large numbers of new audiences whilst lowering our emissions in doing so.