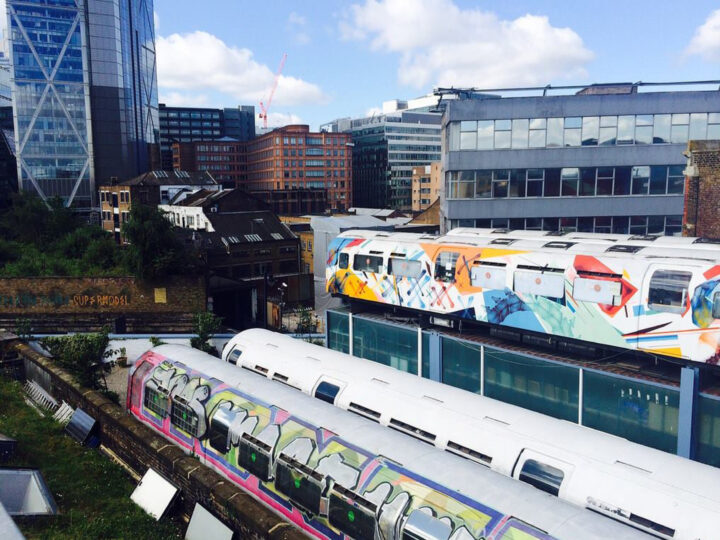 A Space for Creativity, Culture and an Ecological Project

It is a vibrant island in the heart of Shoreditch made up of a renovated 700 capacity warehouse hosting events, a smaller event space that was formerly an old Victorian bathroom, four tube carriages and two shipping containers hosting a co-working community of creative individuals and businesses, and a street art wall and gallery.

Beyond its physical space, it is a unique hub at the centre of an ecosystem linked to its local community as well as European and international networks, and with deep connections into art from music to theatre to street art. Village Underground sees itself as a whole created by its connections; the way VU works is as much a part of crafting inspiration as the art it presents and commissions. Environmental sustainability is a core value of this, and in 2017 Village Underground joined the Julie’s Bicycle Creative Green Community, receiving three stars out of five.

“We’ve always tried to be as green as possible – using 100% green energy, upcycling tube carriages to turn them into offices, running our small but popular ‘no straw’ campaign online and in the venue, but we’re now ready to take things further and make even more positive changes. We’re also keen to share our progress with all the people that make up our community (audience, artists, staff, online…). We want to inspire them to make changes too. Like many other Julie’s Bicycle partners, we’re ready to be a model and lead the way to greener ways of working.”

Village Underground also has a partner space in Lisbon (VU Lisboa) and most recently has started transforming a derelict cinema into the Hackney Arts Space: a new multi-arts centre in Dalston. 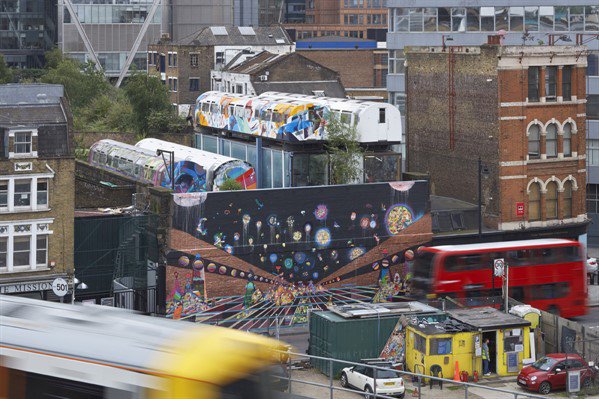 The original aim for Village Underground was the creation of affordable studio space for creative professionals struggling to establish themselves in London.

Construction needed to be relatively straightforward and affordable. This led to the idea of repurposing units that already existed, avoiding a resource-intensive construction project. Fortunately, Transport for London was in the process of scrapping a number of Jubilee Line train carriages that, while perhaps not the most obvious solution, seemed to tick all the boxes.

Next, the perfect location on top of an old railway viaduct in Shoreditch was secured. In 2006, the four tube carriages and two shipping containers that would make up the remaining workspace were hoisted into place by a crane – Great Eastern Street had to be closed for a day to allow this to take place. The trains and shipping containers were rewired and refit into workspaces through a DIY effort. By reclaiming these existing ‘buildings’, Village Underground avoided much of the carbon emissions and waste usually associated with construction projects – and gave a second life to the trains that remain visible from street level today. Much of the other material on site is also from reclaimed sources – including sleepers, staircases, furniture, and flooring.

Adjacent to the viaduct was an old Victorian warehouse that used to be a coalstore for the railway. To create the venue, the rubbish was cleared out, the walls were sandblasted, a floor was laid down – and a roof was put on. Renovations were complete for 2007.

Noise complaints were an early concern when Village Underground started hosting events. At first, it was unclear how the sound might escape – it didn’t seem to be audible from street level. Eventually, the lightweight corrugated roof was identified as a likely source of sound bleed.

Initial advice from acoustic engineers all prescribed one obvious remedy: a new roof of dense concrete would provide the necessary soundproofing.

The cement industry is one of the world’s main producers of greenhouse gas emissions, ranking just after energy and transport. The Village Underground team was keen to explore alternatives.

After persistent insistence on alternatives, Village Underground worked with acoustic engineer Richard Vivian (Big Sky Acoustics), who was willing to calculate how a green roof might provide an adequate level of soundproofing. The key is to ensure the soil is continuously wet, as otherwise it loses much of its sound absorption.

The green roof turned out to be a solution with many co-benefits: it dampens concert noise, provides insulation that helps Village Underground reduce its energy consumption, supports biodiversity, absorbs carbon emissions and other pollutants from the air, and helps combat the ‘urban heat island effect’.

The urban heat island effect is the phenomenon where cities are often several degrees warmer than rural areas, driven by a range of factors including the way that buildings and streets absorb heat. Green infrastructure is one of the best ways to fight this, and is a cornerstone of the Mayor’s new Environment Strategy for London.

Today, the green roof continues to provide a habitat for a range of insects and plants, including a beehive and pollinator-friendly vegetation like lavender. It stands out as an oasis of greenery in an increasingly developed neighbourhood, acting as a source of tranquillity and well-being for the staff and tenants at Village Underground. 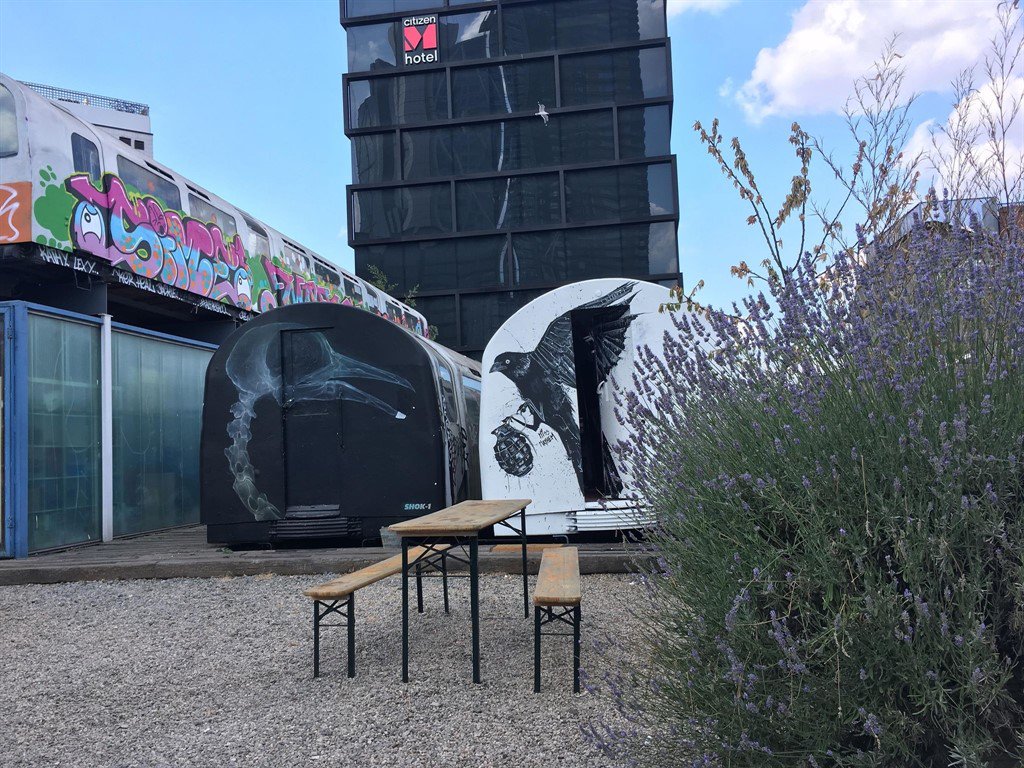 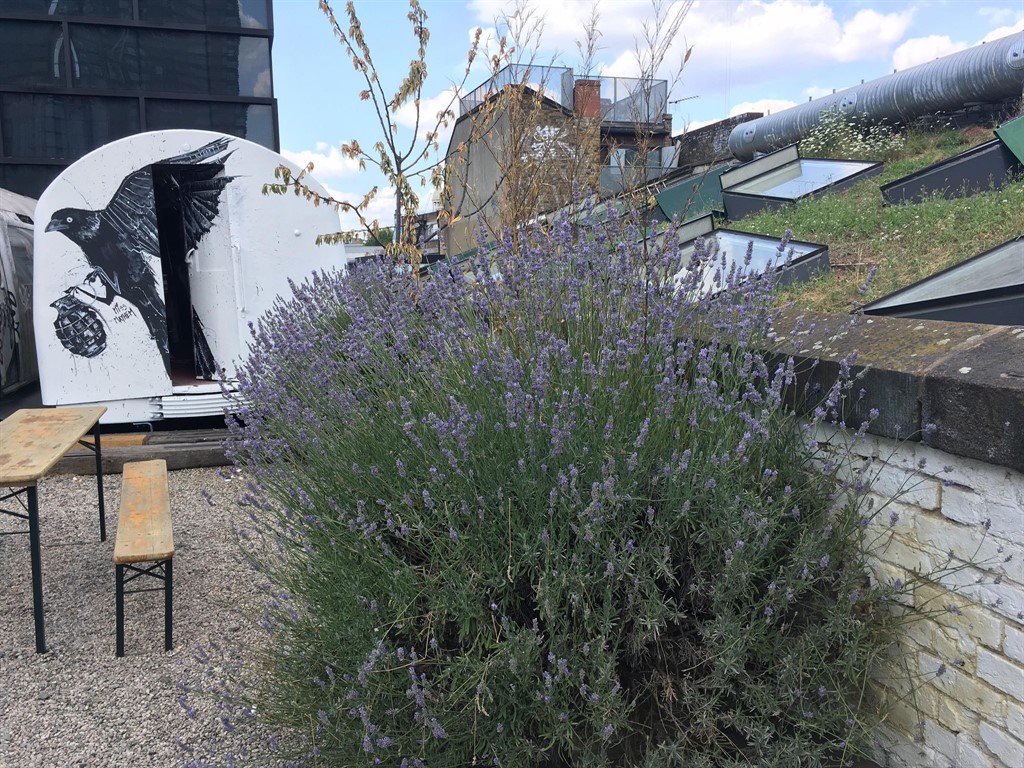 Village Underground has been powered by 100% renewable electricity from supplier Ecotricity for over ten years.

The venue has invested in a range of energy efficiency measures, for example much of the lighting throughout the venue including emergency lighting is LED. A future challenge is improving the insulation and draught proofing in the tube carriages and shipping containers.

The team consistently tries to find ways to reduce the environmental impact of day-to-day operations. For example, switching away from wasteful coffee pods, buying office products like dishwashing soap in bulk to minimise packaging, and printing double-sided on recycled paper.

There have been regular sessions with Dr Bike to support bike maintenance and incentivise staff to cycle to work, and in 2015 Village Underground purchased a ‘pool bicycle’ for its team through a grant from the Hackney Zero Emissions Network.

Day-to-day banking is done through Triodos, an ethical bank that only invests in businesses and organisations bringing about positive social, environmental, and cultural change. 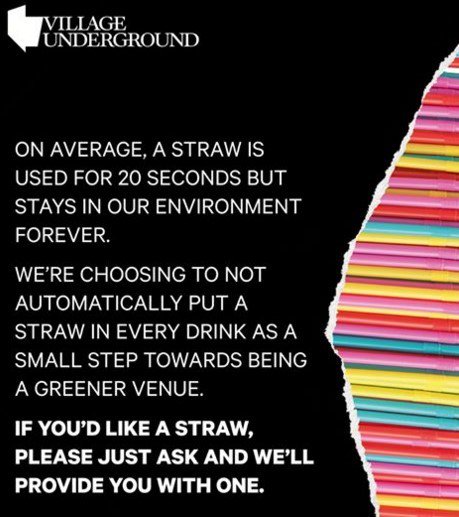 In early 2017, Village Underground decided to remove straws from display at the bar and provide straws to audiences only on request, cutting straw usage by 70% for the next 8 months. At the start of 2018, they removed plastic straws from their bars entirely and now issue biodegradable paper straws when requested. The audience response was overwhelmingly positive.

Beer is served directly in cans, avoiding the need for plastic cups. The VU team is aiming to further minimise plastic use at its bars, and is currently exploring options for introducing a re-usable cup system at the venue.

Proud advocates of building and maintaining a healthy creative ecosystem, Village Underground run creative apprenticeship schemes in partnership with Big Creative Education. They hold silver accreditation from charity Attitude is Everything, who work on improving deaf and disabled people’s access to live music. They were also part of the Mayor of London’s Music Venue Taskforce, and are now active members of the London Music Board and the London Night Time Commission. They are part of several European networks and projects, including Trans Europe Halles and the Creative Europe co-funded Liveurope. 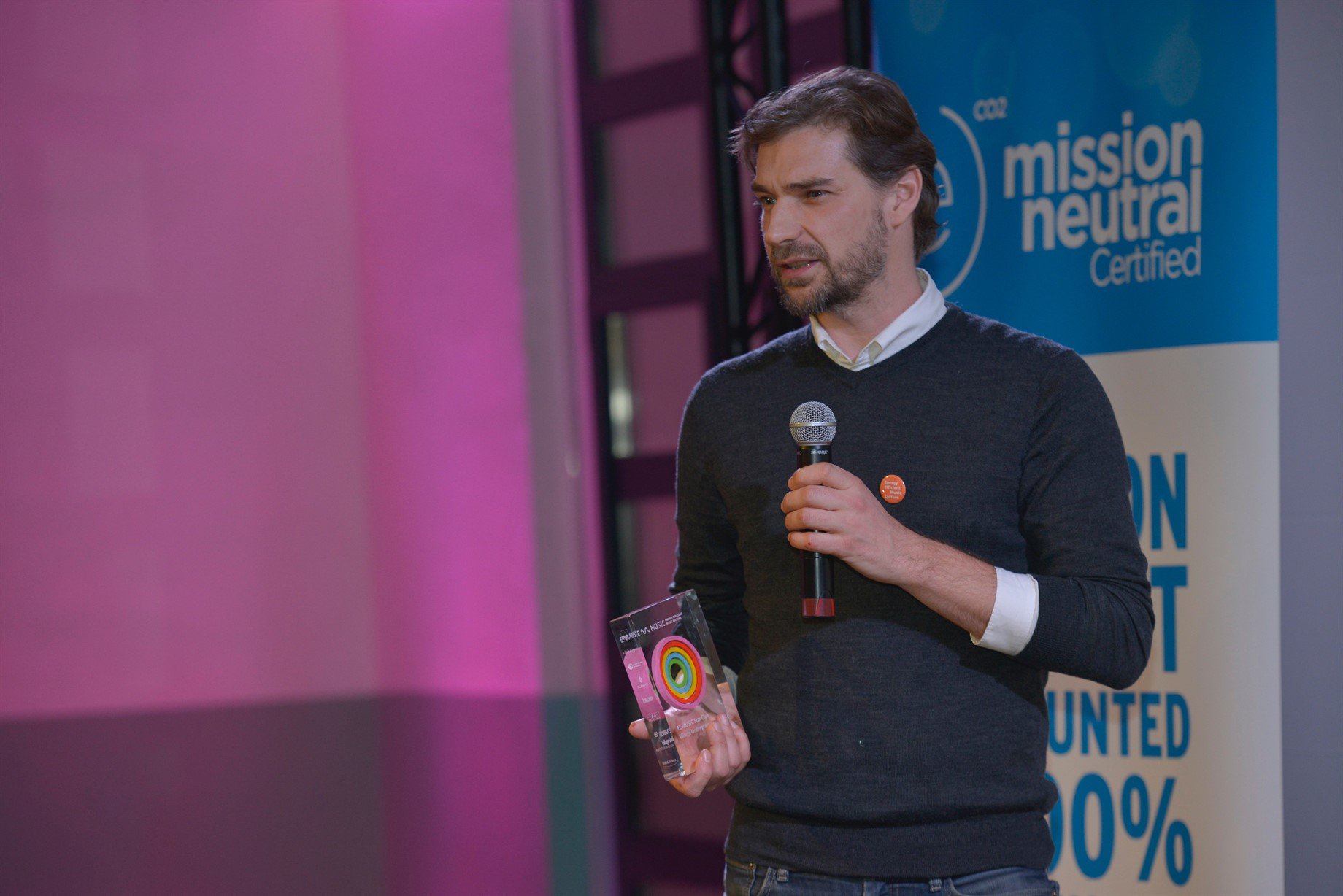 The VU team also contributed to the work of EE MUSIC: energy efficient music culture, a project co-funded by the Intelligent Energy Europe programme of the European Union that provided training and resources for better energy management across music venues and festivals in Europe, sharing expertise among production and venue professionals. Village Underground was awarded the EE MUSIC Star Club Award at the EE MUSIC Awards in 2015.

All images courtesy of Village Underground.