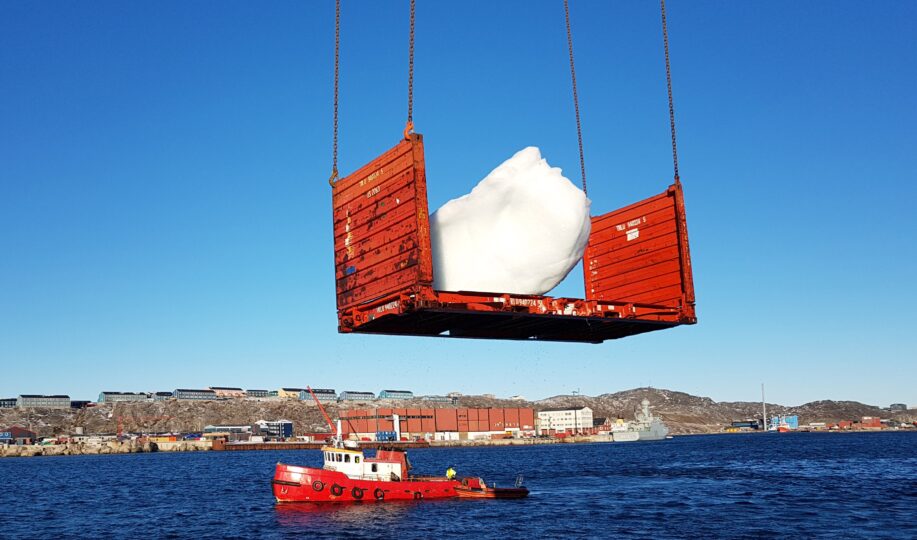 Two questions came up from the press after the launch of Ice Watch at Bloomberg HQ this morning: one was a tangled question to Mike Bloomberg about Trump, Brexit and London and climate change. The second was much more straightforward and directed at Olafur Eliasson, the quiet, thoughtful artist who has created Ice Watch: ‘What is the carbon footprint?’.

This was interesting. The last time we worked on Ice Watch was for the Paris edition to coincide with the COP21 international climate talks which, spectacularly, resulted in the Paris Agreement. Then public interest in the carbon footprint of the work was small. But since then, public awareness on climate has shifted dramatically. The IPCC Special Report published on 8th October highlights just how urgent climate action is, giving us just 12 years to almost halve current emissions in order to avoid more than 1.5 degrees of global warming. The shock waves of this, normally conservative, assessment are rippling beyond the usual shorelines. Carbon footprinting matters – not just because they enable us to reduce our impacts, but also because we have this monumental target of maintaining global temperatures below 1.5 degrees and everything counts. So does culture, the hammer – as Bertolt Brecht called art – in the toolbox of climate action, too often overlooked.

Julie’s Bicycle has been working with Studio Olafur Eliasson for the second time on the carbon footprint for Ice Watch. Ice Watch London 2018 is the third edition of Eliasson’s celebrated public artwork, where large blocks of glacial ice are brought to key global cities. Timed to coincide with COP24, the landmark global climate talks in Katowice, Ice Watch launches on 11th December 2018 at two London sites – one outside the Tate Modern in Bankside, and the other in the City of London outside Bloomberg’s European HQ.

“It is clear that we have only a short period of time to limit the extreme effects of climate change. By enabling people to experience and actually touch the blocks of ice in this project, I hope we will connect people to their surroundings in a deeper way and inspire radical change. We must recognise that together we have the power to take individual actions and to push for systemic change. Let’s transform climate knowledge into climate action.” – Olafur Eliasson, artist

The work highlights the realities of climate change, bringing the public into close contact with the blocks of ice in a visually arresting experience. Physically touching and feeling the ice melt under their skin, the urgency and collective responsibility behind climate action is made tangible.

To understand the project’s environmental impacts, Julie’s Bicycle are calculating the Carbon Footprint for Ice Watch – which has been estimated prior to the start of the project and will be produced in full at the end of the project.

The ice blocks have been responsibly harvested as free-floating icebergs from a fjord outside Nuuk, Greenland, where the Greenland ice sheet loses 10,000 such blocks of ice per second throughout the year – sourcing these blocks of ice from the sea had negligible effect on the quantity of ice in Greenland.

A report on the carbon footprint of Ice Watch in Paris in 2015 is available for download in the press section of the Ice Watch website, alongside other resources.

To help measure your Carbon Footprint and track your sustainability progress over time, please use our free online carbon and environmental calculator covering energy use, water consumption, waste generation, recycling, plus travel and production materials. Contact us about the support we can provide, including our Creative Green certification scheme.