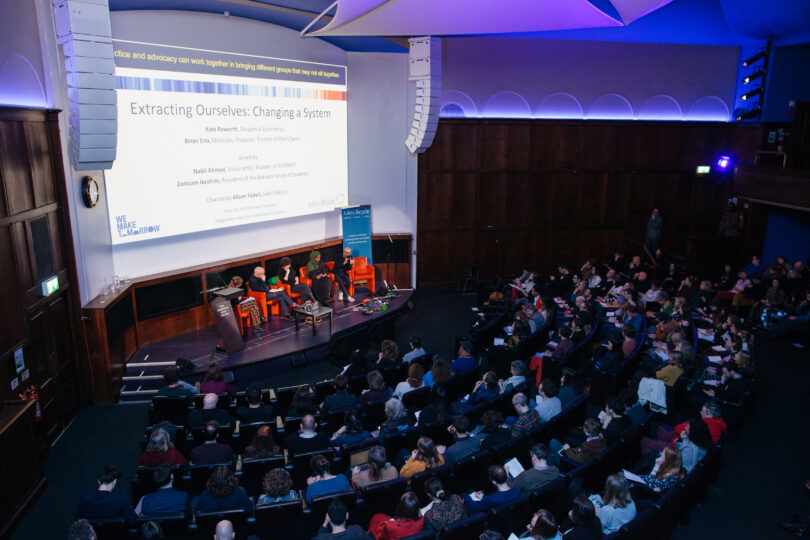 It seems like another time but, a month ago, in partnership with Arts Council England, we hosted ‘We Make Tomorrow’, a day long celebration and investigation into how the cultural sector in its widest sense can respond to the climate crisis. Looking back on a day of amazing contributions, performances, and conversations gives me hope in the light of the current crisis gripping the cultural sector and our society as a whole.

400+ representatives from a variety of cultural organisations and artistic groups gathered at The Royal Geographical Society, with many joining us remotely via Livestream, to form community and hope for the future. Such hope and community seem even more important now.

Whilst there is little the cultural sector can do in the face of Covid-19 except follow the advice and look to protect our institutions, our audiences, and ourselves, the fight against another crisis, a, (dare I say), more extensive, far reaching, and more complex crisis, remains at the heart of the work of Julie’s Bicycle. The climate crisis is real. It is, without radical changes, permanent in its destruction. But it is, still, avoidable.

‘We Make Tomorrow’ was our positive response to that crisis, featuring cultural figures, performers, community leaders, economists, scientists and activists. It was both an assessment of where we really are and what we, collectively as a community, can do to place culture at the heart of the climate debate to drive changes that create a better, fairer, more sustainable and regenerative world. It was begun from a belief that the climate crisis is a cultural crisis and that culture must be pre-eminent in the response.Culture must work with other disciplines to inform, educate, and innovate for a better world. As we find ourselves forced to reinvent our normal lives, it seems a good time to look back on the day and take the lessons and learnings from it to imagine a new world.

Listening to the science

Chris Stark, Head of The Committee on Climate Change, opened the day’s panel discussions. Whilst his walk through of the key scientific facts was sobering, Chris echoed our message of hope by describing ‘a moment of climate choice’ for every citizen on the planet, reiterating the findings of his recent paper to Government that net zero was achievable with a whole society transition. Placing culture at the heart of this change, ‘raising awareness about what is coming, preparing people for the fundamental changes ahead’, Chris helped set the tone for much of the discussions that followed.

The climate crisis is not a simple problem. It connects personal and institutional behaviour, individual and collective actions, the global system and the local network, with large and small actions all contributing to the problem. For cultural practitioners, it presents different challenges and obstructions.

Across the day, speakers from the cultural world and elsewhere discussed those challenges and proffered inspiring and innovative solutions. Richard Ashton of Opera North discussed the scale of their challenge with a run through of the vast resources involved in productions. Stating that ‘a company that is not environmentally sustainable has no future’, he also offered hope by detailing the governance level steps being taken by Opera North to change their processes and actions with data as their starting point.

Reimagining the system, changing our beliefs

At the heart of the climate crisis is a system crisis. Kate Raworth, author of ‘Doughnut Economics’ spoke to the systems that drive the crisis with Brian Eno. Their conversation was a fascinating examination of, and clarion call for, a circular, regenerative economy that works for all and rejects the resource driven growth economy of modern times. Featuring swimming ring props and a beautiful explanation of the power of culture to imagine new realities courtesy of Brian, their focus on system change was picked up by Frances Morris of Tate Modern who observed that her entire career to date had been predicated on ‘growing audiences’, highlighting the sea change in attitude that is necessary to drive real progress. Andrea Carter from D6 Culture In Transit vocalised this new attitude when she talked about ‘what slower and deeper engagement means’, in relation to the concept of ‘degrowth’, whilst also speaking to the role of colonialism in their work in Barbados.

Moving into the politics of climate change further, the need for fairness predominated in all its forms for our speakers. Zam Zam Ibrahim, President of the NUS, spoke strongly on the links between the climate crisis and global injustice, the motivation behind her on campus campaign ‘Climate Change is racist’ whilst Nabil Ahmed, forensic architect and founding member of INTEPRT reminded us all that ‘this fight didn’t only start in the cities of the global North a few years ago, it has been going on for a very long time’, whilst referencing corporate activities across the Southern hemisphere. Bringing the focus back to the UK, London mayoral candidate and musician Drillminister spoke for his community with a strong call for activism and community solidarity resisting the degradation of local environments and those who would put profit ahead of health and wellbeing. Farhana Yamin, UN negotiator and climate lawyer, also called for greater activism across the cultural community at trustee and board level in a passionate plea for swifter action on climate injustice.

Placing people at the heart of change

Charise Johnson, Policy Advisor at The British Academy, began her contribution by stating, ‘Nature is for everyone and environment is everywhere’. The ownership of our environment, our reliance on it for our survival and responsibility for its preservation were an integral truth of the day. Noga Levy Rappaport of the UK Student Climate Network discussed a more active interpretation of taking responsibility through their work linking young people across the globe to create ‘a more equitable, secure future built on local ownership’ that drives a movement without leaders based on community organisation and access.

Jason deCaires Taylor demonstrated how culture can contribute to expression and the environment with a walk through of his underwater sculptures, the placing of which have led some sites to become marine protected areas. Performers from The Serpentine Galleries Ecological Project and musicians from The Nest Collective gave voice and expression to our planet, its struggles and our connections to the environment through a series of beautiful and affecting performances that reinforced the ability of culture to transmit ideas, emotions and beliefs to a collective consciousness. Ayesha Tan Jones brought this fusion of collectivism and expression together beautifully in her performance, using threads placed on each seat in the theatre to encourage the audience to tie themselves together in solidarity to protect, whilst performing her vocal piece, ‘Knot Tying for Survival’. The sight of everyone joined together was both a metaphor for our amazing cultural community and the strength that comes from joining together in a shared purpose.

So many others contributed to this monumental day of discussion, performance and action. It is no exaggeration to say that at many points in the day we were taken aback by the feeling of positivity and action as the whole spectrum of our cultural sector shared their thoughts, beliefs, hopes and, most importantly, determination to act as a beacon and guide for a positive and lasting response to the climate emergency.

Whilst our practical actions may be curtailed in the present time, the community that came together through We Make Tomorrow endures. As we move into an uncertain immediate future, the hope we expressed on the day needs to find permanence and continue to drive meaningful cultural and organisational responses that place ourselves and our work at the centre of a better tomorrow.