Common Ground: Round Up

Nearly 100 organisations and practitioners from across the UK came together for ‘Common Ground: Culture, Climate and Social Justice’ to launch the Colour Green podcasts and explore the connections between climate breakdown, inequality and social justice – and the role the arts and wider cultural sector can play in recognising and redressing these imbalances.

It was a packed and provocative day, with a series of talks, in-conversations and performances prompting lively discussions about how the way we eat, inhabit our cities, relate to our local communities, practise self-care, and understand our privilege all play a vital role in the fight for climate justice. The main objective of the day: to inspire creative responses to the climate crisis that are inclusive and encompass broader perspectives and experiences of its impacts and legacy.

Huge thanks to all the speakers and a big shout out to the brilliant performers of Fog Everywhere who finished the day highlighting the impact of pollution on inner city Londoners with such a powerful sonic punch – see them in action as part of the livestream and see full photos on our Facebook gallery.

“Being an active agent in making change happen will help you establish a connection with what’s happening around you.“

“Not enough people are aware of what’s possible. We need to be aware of the power we have. We give too much credit to institutions (banks, government etc). I think we have much more power than we realise and we need to become aware and start using it. Developing Social housing requires an amount understanding of how money works and borrowing a lot of it.“

“When we work with food we can amplify the potential for learning about our natural environment. We can teach everything about nature with a cabbage!“

“Diversity in nature is what makes the whole system resilient – the same applies to our communities.”

“Moments of joy are moments of connection…This dissident loving happening in these moments of crisis: this is joy. It’s vital to our mental health to hold onto art – and so integral to social change to think in a creative, holistic way.“

“We need to find a new language for the time that we are all in… We have to accept that the certainties of old are gone, certainties are now a privilege and we have to learn to sit with the profound uncertainty of our time.“

“There are fundamental structural inequalities built into the current demographics and understanding of what is our current climate movement. Climate Justice must include reparations and redistribution; a greener economy in Britain will achieve very little if the government continues to hinder vulnerable countries from doing the same through crippling debt, unfair trade deals, and the export of its own deathly extractive industries.”

“Words and music can move people, they can generate energy, they can literally resonate in the body, which impacts people at a different level than marketing copy can… Talking about art in relation to social justice, let’s talk about our humanity to impact people and start to bring about profound changes.“

“I really feel that this is absolutely the direction all environmental discussions need to be moving in – the philosophical and ethical dimensions of every human’s shared custodianship of the earth and the interconnectedness and shared responsibility we have, and the down-to-earth, everyday-ness of this…fighting for a fairer world and fighting against climate change.”

“We need to hear other voices, particularly those from the frontline of climate change. The event provided me with an introduction to both the barriers and opportunities for these conversations to continue. And they need to. Time is running out.”

“Congratulations on the podcast they have entertained and informed me during last weeks commute, I can’t wait to listen to the next in the series.“ 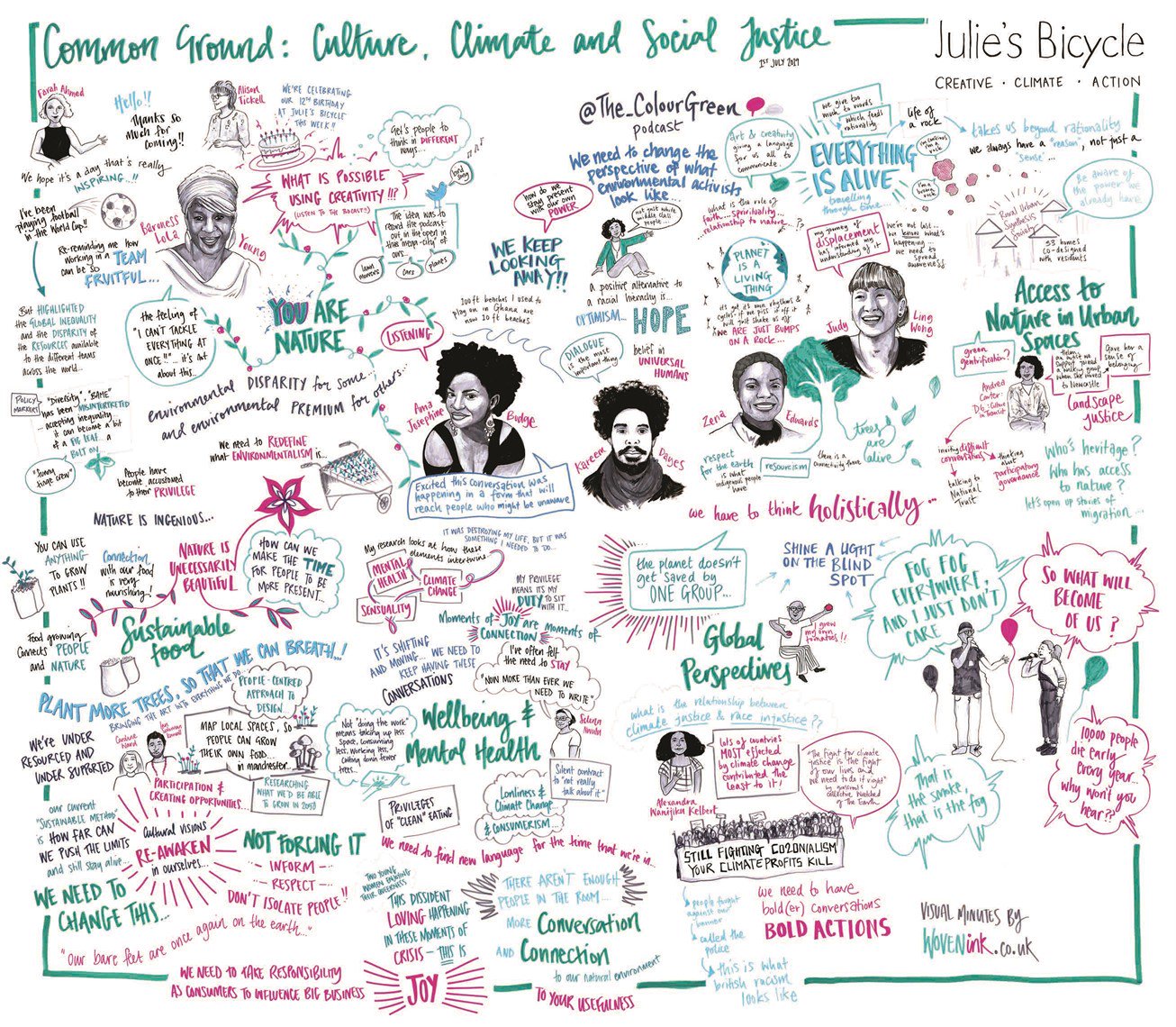